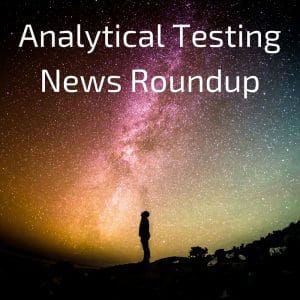 Analytical testing techniques are used by scientists and researchers all over the world to make interesting and groundbreaking discoveries.

Here we roundup some of the most interesting and cool bits of news and research featuring analytical testing methods in action:

1. What Makes Dirty Laundry Stinky? Scientists Use New Analytical Technique to Find Out

Have you ever wondered what makes your dirty laundry so smelly? Well, scientists from Northumbria University recently set out to find an answer to that question, as well as to identify laundry techniques to combat them while being kind to our environment.

According to Science Daily, using a method called static headspace—multi-capillary column—gas chromatography—ion mobility spectrometry (SHS-MCC-GC-IMS), the research team identified six main VOCs contributing to the smell—some of which survive washing in a machine at 20 degrees Celsius.

“The work is fascinating as it links an everyday event — the washing of clothes — with cutting-edge research,” Professor John Dean, corresponding author of the study, reportedly said. “In this particular research project we applied a new and innovative analytical technique for the detection of volatile compounds found in laundry items. We hope this provides a way of analyzing the effectiveness of different washing techniques.”

2. Scientists Discover How to Reduce Arsenic Levels in Rice

Did you know that rice can contain as much as 10 times more inorganic arsenic than other foods?

According to Chromatography Today, a research team at Queen’s University in Belfast have been looking for ways to reduce arsenic levels in rice and found that a percolating method was the most efficient—removing up to 85% of arsenic in a variety of samples of cooked rice. Ion chromatography was used to measure the arsenic levels in the cooked rice.

With rice being an essential food item for half of the world’s population, this is a significant breakthrough, the publication said.

3. How GC/MS is Sniffing Out Real Parmesan Cheese

Earlier this year, various news reports revealed that some parmesan cheese may not be 100% authentic, and could contain fillers such as cellulose or less expensive cheeses. But scientists are now reporting a method for identifying adulterated cheeses using gas chromatography-mass spectrometry (GC/MS).

According to SpectroscopyNow, scientists recently analyzed more than 300 samples of cheeses using a GC/MS method to see if it could distinguish between cheeses made with milk from cows that were or weren’t fed silage.

“The team found that samples of Grana Padano, a cheese similar to parmesan but made with milk from cows allowed to eat silage, contained cyclopropane fatty acids,” the SpectroscopyNow wrote. “However, these fatty acids were not present in the PDO parmesan samples.”

Since GC/MS is a simple and fast analytical testing method, researchers believe it could be used by the industry to screen large number of samples.

Thanks to a variety of analytical testing methods, including FTIR, scientists have found evidence of a fire from 800,000 years ago in a Spanish cave. The key findings were recently published in Antiquity, according to PastHorizons Adventures in Archaeology.

Scientists from all over Europe collaborated to use contrasting analytical methods on various fossils and fragments to come to their conclusions. For example, FTIR results showed bone had been heated at >400-450 degrees Celsius though below <700-800 degrees Celsius.

5. The Beginner’s Guide to Analytical Testing

Whether you’re interested in pulling out some scientific knowledge at the next party you attend, or you’re a quality assurance specialist who needs to explain the benefits of analytical testing to your boss, discover the basic definitions, pronunciations and applications for a variety of analytical testing methods in the latest blog post from Innovatech Labs.