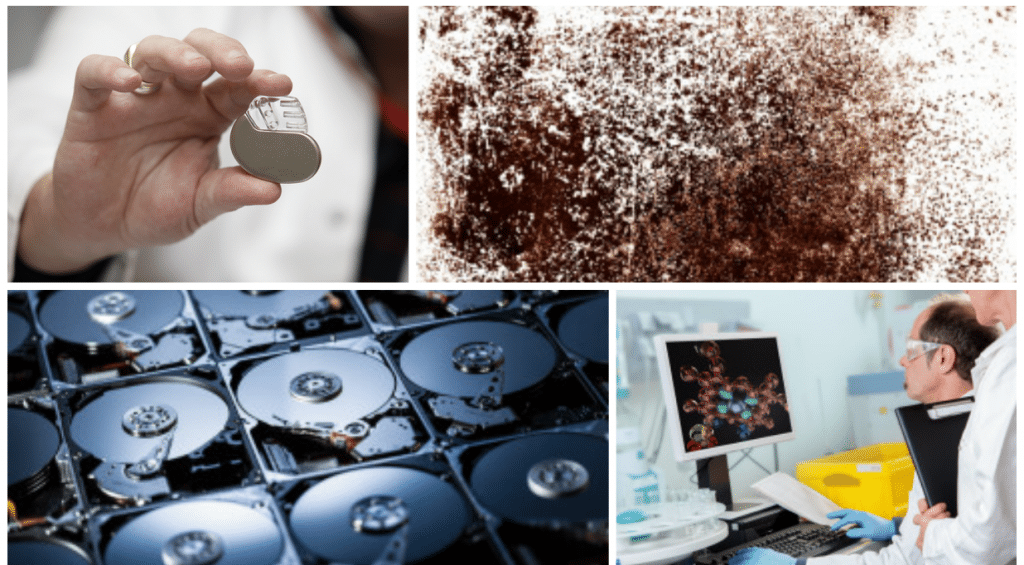 For us in the analytical testing field, we’re often asked about the work that we do. We love talking about all the high-tech techniques and pieces of machinery we use.

“We recently used headspace GC/MS to outgas an epoxy sample to determine whether there were any qualitative differences between that sample and another known sample.”

After reading that, you’re probably thinking: I have no idea what you just said.

Analytical testing, which is also referred to as materials testing, is a broad term used to describe various techniques that are used to identify the chemical makeup or characteristics of a particular sample. Manufacturers in industries such as pharmaceuticals, food, electronics and plastics often use analytical testing for reverse engineering or failure analysis, and identifying contaminants or stains on products.

If you’re OK with a little more learning, here we dive into the basic definitions, pronunciations and applications of some common analytical testing techniques. Whether you’re interested in pulling out this knowledge at the next party you attend, or you’re a quality assurance specialist who needs to explain the benefits of analytical testing to your boss, this lesson should prepare you nicely.

Definition: Auger Electron Spectroscopy, also known as Scanning Auger Microscopy (scan-een—oh-jair—mike-row-sko-pee), is a technique that is used to get information about the surfaces and interfaces of a material or sample.

Applications: AES is an excellent tool for identifying contaminants or stains on conductive and semi-conductive surfaces, analyzing passivation layers on medical devices, and analyzing small features such as particles, small diameter wires or bonding pads within electronic devices.

Definition: Electron Spectroscopy for Chemical Analysis is a technique that is used to obtain elemental and binding information about the surfaces and interfaces of a material or sample.

Applications: ESCA can be used to identify contamination and stains, analyze the passivation of stainless steels, the oxidation of chromium and iron, and to study the surface chemistry of polymers, glasses and other insulators.

Definition: Fourier Transform Infrared Spectroscopy is a technique that is used to identify organic and inorganic materials on the surface of a product based on their absorbance of infrared light.

Applications: FTIR has a wide range of applications and is often a go-to test during a manufacturer’s quality control process to identify additives in a sample or contaminants on product surfaces.

Definition: Ion chromatography is a technique that is used to separate and quantify anions and cations using High Performance Liquid Chromatography

(hi—per-for-mense—lick-wed—chrome-a-tah-graph-ee) and a conductivity detector.

Applications: IC is an especially useful cleanliness testing technique for medical device, electronics and plastics manufacturers, as it can reveal microscopic ionic contamination that can lead to product malfunction, failure or safety issues.

Definition: Gas Chromatography Mass Spectrometry is a technique that is used to separate, identify and quantify organic compounds in a sample.

Applications: GC/MS has a wide range of applications that include: identifying unknown contaminants, residual solvents, trace elements and strange odors, and environmental analysis.

Definition: Liquid Particle Counting is a technique that is used to measure the size and distribution of particles in a liquid or on solid samples. Particles are extracted with water, then analyzed by irradiating the liquid with a laser diode and detecting the scattered light.

Definition: Scanning Electron Microscopy and Energy Dispersive X-Ray Spectroscopy are used in tandem to magnify the surface and determine the composition of a sample. SEM produces a high-resolution image of a sample’s surface topography. EDS analysis can then be used to obtain elemental information about a sample surface.

Applications: SEM and EDS can be used to examine defects in a products, determine the elemental composition of foreign materials, analyze the thickness of coatings, and determine grain and particle size for a variety of industries, including: general manufacturing, microelectronics, medical devices, food processing, research and development, insurance and litigation support.

Applications: Light Microscopy and Imaging is used to study the structure and surface of a variety of different samples, including: polymers, plastics, glass, semiconductors such as wafers and integrated circuits, ceramics, and many other materials.

Definition: Differential Scanning Calorimetry is a thermal analysis technique that is used to measure the rate of heat flow as a function of temperature.

Definition: Thermal Gravimetric Analysis is a technique that is used to measure weight loss as a function of temperature in a controlled environment.

Applications: TGA is often used to ascertain the differences in polymers and to determine the amount of organic and inorganic filler used in polymers.

Definition: Melt Flow Rate is a technique that is used to measure the viscosity of a polymer through a defined orifice at a constant temperature.

Interested in learning more about the applications of each of the analytical testing techniques? Contact Innovatech Labs today.