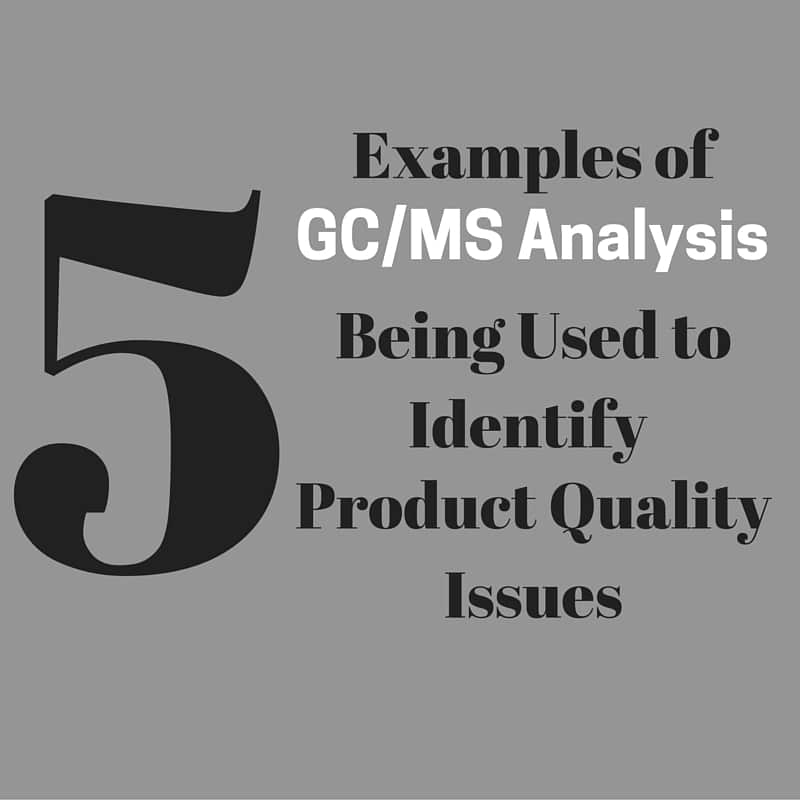 Product quality is of paramount importance for all manufacturers. And GC/MS analysis from a materials testing lab can be an incredibly useful tool to ensure that quality.

GC/MS analysis, or gas chromatography mass spectrometry, is a materials analysis technique that’s used to identify the precise composition of a sample and to quantify its components. For manufacturers, this technique can be used to identify unknown substances or contaminants that can or have affected product quality, function or safety.

Learn more about GC/MS lab services and find out if GC/MS is right for your manufacturing application by contacting us.

5 Applications of GC/MS in Manufacturing

A pharmaceutical company wanted to know whether ethanol was present in a powdered drug. Using static headspace and GC/MS analysis in tandem, Innovatech Labs was able to positively identify ethanol from its mass spectrum, which is shown in the figure below.

2. Identifying the Presence of Toxins & Trace Elements in Plastic Wrap

Many consumers have become concerned that plastic wraps are leaching toxins into the food they’re designed to protect. With this in mind, researchers soaked several different brands of plastic wrap in water and exposed the samples to heat. The scientists then used GC/MS analysis to analyze the water and see if it had been contaminated by the plastic wrap samples.

While all of the plastic wraps left residual compounds in the water, the chemical composition of the trace elements varied by sample. Some samples leached endocrine disruptors and phthalates—which pose potentially serious health risks—while others did not.

Epoxies are important curing agents for many manufactured products, and a failing epoxy can mean a failed product. Innovatech Labs was tasked with analyzing a failing epoxy to determine whether it contained anything different from an epoxy known to work well. Using static headspace and GC/MS analysis for the epoxy outgassing, the test showed that the failing epoxy had a higher concentration of benzene.

Taste and smell are incredibly important to consumers, and they should be equally important to manufacturers. Foul tastes or strange odors are likely signs of a contaminant.

For example, environmental and internal factors could cause chemical changes in soft drinks that taint the flavor or smell of the beverage. Headspace and GC/MS analysis can identify the odor-causing compounds and uncover the root cause of the contamination.

The ingredients used in food products all contribute to overall taste and quality. Even small differences in the composition of ingredients can affect the food preparation process or the food itself.

Learn more about GC/MS Analysis with an overview of how it’s used and how it’s done.

For more information on GC/MS analysis services from Innovatech Labs, contact us today.