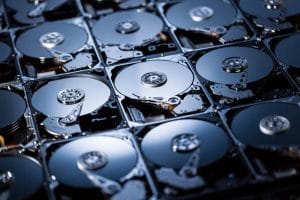 Hard drive manufacturers have been pushing the limits of technology since the medium of data storage was invented. It’s amazing that while storage capacity has increased exponentially, the size of the storage vessel has decreased significantly.  State of the art devices now store as much as 6 and 8 Terabytes (TB), and hard drives in the next decade could store as much as 60 TB. Technologically advanced hard drives like these require state of the art microcontamination and hard drive testing.

The testing process in hard drive research and development has long benefitted from analytical testing methods which measure the cleanliness of the components comprising the hard drive. Clean environments, precious metals, and now, sealed helium casings are all part of the development of hard drives. However, once a new hard drive has been developed and manufactured, it should also be tested for microcontamination before being shipped to consumers. While research and development conditions may be very clean, contaminants are often introduced during the manufacturing process. Testing for contaminants will ensure that your product process is as clean as possible.

For example, in a sealed and heated environment like a computer hard drive, an adhesive can release plasticizers or other low molecular weight materials. These materials can reform in another location of a hard drive where they may cause shorts, crashes and other malfunctions. Outgassing testing methods, such as headspace analysis, are required to prevent potential failure and to ensure product quality and effectiveness.

Contact us today to learn more about our microcontamination testing services for hard drives and hard drive components.