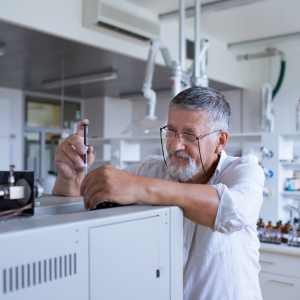 GC/MS analysis lab services can be used to identify and quantify unknown samples, contaminants, trace elements in samples, environmental effects on samples and more. Results from this test can identify residual monomers in a polymer, study gasses evolved during material heating or within a sealed environment, and quantify compound additives.

During GC/MS analysis, the sample is injected into a gas chromatograph which volatilizes the sample, then separates the various components of the sample based on size and/or polarity. The separated components then go into a mass selective detector. The resulting mass spectrum allows for the identification of the components using standard reference libraries.

Outgassed products can be identified by GC/MS analysis using either static or dynamic headspace analysis.

Gas Chromatography/Mass Spectrometry (GC/MS) is primarily used to ensure product quality and consumer safety by analyzing for specific compounds, making it a popular solution for many manufacturers. Combining aspects of both gas-liquid chromatography and mass spectrometry, GC/MS analysis is a materials-analysis technique used to perform a specific test to positively identify a specific substance in a sample. Consequently, it is also considered the “gold standard” for forensic substance identification.

Is GC/MS Right for Your Application?

When the materials-analysis job calls for a specific test to positively identify a specific substance or substances in a sample, GC/MS is the usually the tool of choice. For this reason, it finds several applications in manufacturing – for example, detection and identification of residual solvents, trace impurities in liquids, and sealed-environment atmospheric impurities. GC/MS analysis is also used extensively in forensics – fire investigation, drug detection, explosives investigation, and environmental analysis.

How do you analyze a Sample?

In the GC/MS process, a sample is first injected into a gas chromatograph, where components are separated according to size and/or polarity. Then, the components pass into a device known as a mass selective detector. It’s at this stage that a mass spectrum is obtained and compared against standard reference libraries in order to identify unknown components in the sample.

At best, a non-specific test can only statistically suggest the identity of a substance in a sample, which sometimes results in false positives. GC/MS, however, is a specific test and can, as a result, be used to positively identify the actual presence of unknown substances in a sample. Either gaseous or liquid samples, as small as several micro-liters, can be analyzed. And the whole process of GC/MS analysis takes about one hour or less, depending on the complexity of the compound to be analyzed.

1)      Inject sample into Gas Chromatograph (GC) – The sample is injected into a port which is heated to up to 300° C where the material is then volatilized.

2)      Separation of gaseous components as they flow through the column – The column is wound within a special oven which controls temperatures from -20° to 320°.  The column surface is coated with a material which will separate the various chemical compounds in the sample based on size and/or polarity. Sample components that are more volatile and smaller in size will travel through the column more quickly than others.

3)      Analysis in the Mass Spectrometer (MS) – The separated components flow directly out of the column and into the MS which has three internal steps:

a.      Ionization source – components are blasted with electrons, causing them to break up and turn into positively charged ions

b.      Filter – the ions pass through an electromagnetic field and filter through based on mass. Analysts set a predetermined range of masses to be allowed through as they pass from the ionization source.

c.       Detector – counting the number of filtered ions, the information is sent to a computer and a mass spectrum, a distribution of ions of different sizes, is generated

The mass spectrum is used to identify the components by comparing each to reference libraries of over 275,000 unique spectra. To quantify compounds within the analyzed sample, analysts establish a standard curve of known concentrations of each material.

Very small sample sizes are required for testing. Samples can be either a liquid, gas, or solid that can be outgassed. The samples must have a size of several microliters for gas or liquid, and .5 – 1 gram for solids. With this highly refined process, GC/MS analysis can be completed in as little as one hour. This means that a testing lab like Innovatech Labs can turn around a sample analysis within a day if needed. Learn more about our GC/MS analysis services.

While GC/MS analysis is a very useful technique, it is often combined with other methods in order to find comprehensive solutions to given issues. Innovatech Labs offers many materials analysis techniques and specializes in non-routine lab testing, so it is likely that we can help you solve your issue.