You are here: Home / Newsroom / Articles on Ion Chromatography / The Whens, Whats, and Whys of Ionic Contamination 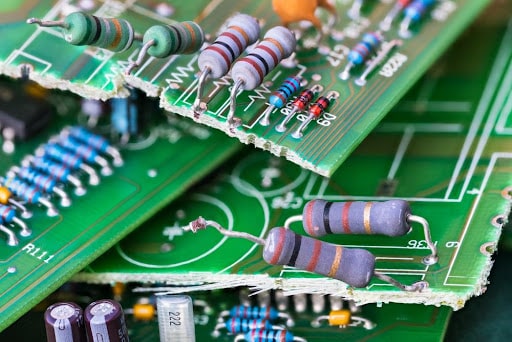 Ionic contamination is a serious problem for any and all precision conductive electronic devices, which means it’s also a serious concern for anyone who manufactures them.

Whether you’re worried about your own products or you just want to know what ionic contamination is for future reference, this is the most relevant information you should have:

What is Ionic Contamination?

Ionic contamination is a phenomenon that affects highly-sensitive conductive devices such as printed circuit boards (PCBs).

When substances that contain an ionic (positive or negative) charge, such as salt, acids, or perspiration, come into contact with a component of a highly-sensitive conductive device such as a printed circuit board (PCB), they may leave behind an ionic residue.

Then, when a charge passes through the PCB, this residue may change or redirect that charge in a process called electrochemical migration. When charges are amplified more than they should be, or flow to places where they shouldn’t, they threaten the effectiveness and safety of the contaminated device.

What is susceptible to Ionic Contamination?

Ionic contamination is a significant problem for any highly-sensitive, precision device that relies on its conductivity to function properly, such as circuit boards or electric medical devices meant for human implantation. It is a serious concern for various manufacturers in the environmental, industrial, biological, pharmaceutical, chemical, electronic, and food sectors.

In the case of PCBs, many of the materials and processes used during the manufacturing process, such as soldering and flux activators, naturally and unavoidably generate ionic contaminants. If these ionic contaminants contact the unguarded conductive components of the PCB and are not cleaned before the PCB is assembled, they will significantly shorten the usable life span of the product.

Why is Ionic Contamination such a serious problem?

Ionic contamination hastens electrochemical migration and dendritic growth, both of which hamper the precision conductive device’s ability to properly direct its charge. This will drastically hasten the rate at which internal components corrode, warp, and break down.

Dendrites are a major problem caused by ionic contamination. Dendrites are tiny metallic shavings that drift off of the positively-charged anode across the ionic solution left behind by the contaminant and onto the negatively-charged cathode. These shavings gather together over time, forming alternative pathways for the charge conducted between the anode and cathode to flow.

Depending on where dendrites redirect the charge, they could create short circuits or amplification that could seriously damage the device, leading to total system failure or even potential combustion (if the device is exposed to air).

When should I test my products for Ionic Contamination?

Generally, the right time to test products for ionic contamination is as a quality assurance step right before you finish the manufacturing process. You should conduct ionic contamination testing on batches of products at fairly regular intervals as a part of your full quality control program.

Advanced ion chromatography analysis can identify not only the existence and extent of ionic contamination, but also the specific ionic contaminants on the device. This will help you isolate the step in your process where the ionic contaminant was introduced, so you can ensure future products won’t be contaminated the same way.

If your products are stored for a long period of time without usage, it may also be a good idea to test them for ionic contamination before you rotate them back into active use. Ionic contaminants may also settle on conductive devices over time in storage, and finding them early could prevent a future malfunction at a critical time. This is, obviously, particularly important for medical devices.

How can I test these products for Ionic Contamination?

Our experts offer advanced Ion Chromatography testing that separates and quantifies anions and cations and then determines their specific form and charge using a conductivity detector.

This form of testing shows you both the extent and form of ionic contamination on a product, giving you all the information you need to deduce where ionic contaminants contacted your product and how you can prevent them from doing so again.