You are here: Home / Newsroom / How to Analyze XPS Data: A Beginner’s Guide 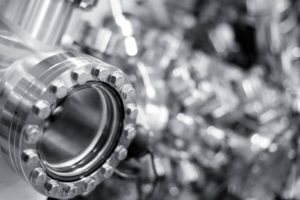 If you’ve ever sent a sample in for surface analysis, there’s a good chance that you’re already familiar with x-ray photoelectron spectroscopy (XPS). XPS analysis is a widely used surface analysis technique, with applications across numerous industries.

Also referred to as electron spectroscopy for chemical analysis (ESCA), XPS is suitable for a broad range of materials, and can provide valuable information about the elemental and binding energy of a material’s surfaces and interfaces.

Of course, XPS survey scans aren’t exactly self-explanatory. What do all those peaks and jagged lines mean? When you work with Innovatech Labs, you’ll receive detailed insights and actionable recommendations in an easy-to-understand format.

And for those of you who’d like to dig in and truly understand the data and what the results mean, we have developed this introduction to analyzing and interpreting XPS data.

In order to interpret XPS or ESCA results, it’s helpful to understand how this technique actually works. Simply put, XPS uses an x-ray beam to excite atoms on the surface of a solid sample, which spurs the release of photoelectrons. From there, the kinetic energy and the number of electrons that escape from the top 0 to 10 nanometers of the sample are measured. 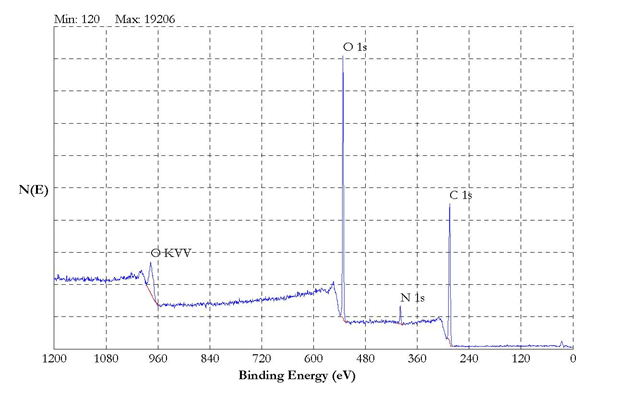 Because XPS only detects electrons that escape from the sample and reach the detector, the elemental signals from the surface are much stronger than from those deeper in the sample. In addition, the binding energy changes with the chemical environment of the element, causing an effect is known as “chemical shift.” As a result, XPS can estimate the thickness, uniformity, and surface chemistry of the sample’s surface, coatings, and films.

XPS detects all elements besides hydrogen and helium, so a survey scan is usually a starting point for most analyses. For each element, there is a range of electron states open to excitation by the x-ray beam. Seeing the full range of elements present in the sample’s surface makes it easier to zero in on specific XPS spectra in subsequent high-resolution testing.

How to Analyze XPS Spectra Data

XPS analysis is rooted in understanding the position and intensity of peaks on the survey scans and the high-resolution spectra data. So, when it comes to XPS data interpretation, here’s what you need to know.

In XPS analysis, the position of a peak on the x-axis indicates the elemental and chemical composition. This axis is traditionally displayed as “Binding Energy” in electron volts (eV).

The y-axis in XPS analysis records the intensity of surface material—how much of a particular element can be found at the surface. This axis usually displays the total number of photoelectron counts per second.

Typically, acquisition of the photoelectron intensity versus binding energy from around 1,200 eV to zero eV is called a survey scan.

Like life, XPS results can sometimes be a little messy. Sometimes there won’t be clearly resolved peaks on the x-axis. For example, a sample with both tin and lead might have interfering peaks. Innovatech Labs uses peak models to separate elemental information for further analysis. 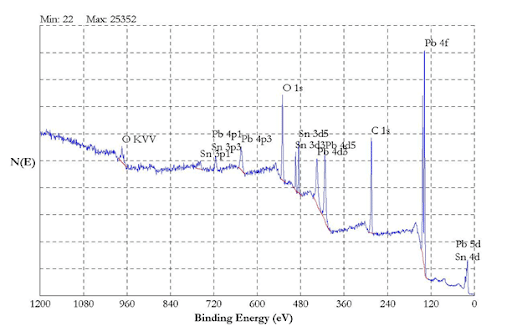 More than One Elemental Peak

In some cases, elements have more than one transition that is suitable for quantification. For example, a scan of your sample may include two notable peaks for silicon (e.g., Si 2s and Si 2p). To positively identify an element, it’s important that all of its transitions be present in the survey scan and show approximately the correct ratio in their intensity.

However, only one transition can be used in analysis. In this case, it’s important to use the transition that has the largest peak. This minimizes the chance that smaller peaks will interfere with the analysis. 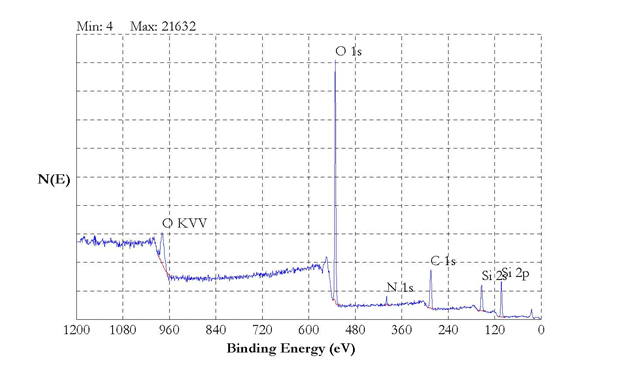 Now that you understand the basics of how to read XPS spectra data, below we share some examples of various testing results.

Analysis of Haze on a Polyimide Substrate

When an electronics manufacturer observed a haze on a polyimide film, they suspected chromium residue resulting from a chromium film not being completely etched during the production.

A manufacturing client wanted to ensure that a stainless steel passivation layer was sufficient for rust prevention. Our team turned to XPS analysis for quantitative measurement of surface impurities in the oxide layers and to provide information about the oxidation state of chromium and iron. We were able to discern the chromium-to-iron ratio is 2.4 and meets scientific requirements for rust prevention. 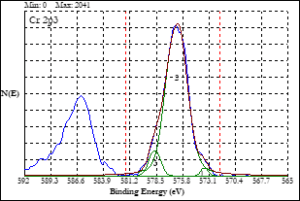 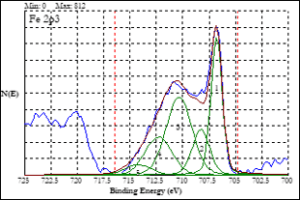 XPS analysis is a great starting point for a wide range of applications in manufacturing and quality control. If surface chemistry is critical for product function and safety, XPS might be the test for you. Innovatech Labs is eager to field any of your questions about XPS or other materials analysis.

Contact us today for more information. You can also request a quote if you have a specific project in mind.