You are here: Home / Newsroom / GC/MS Analysis Archive / What’s That Smell? The Chemistry Behind the Seasonal Scent of Frankincense 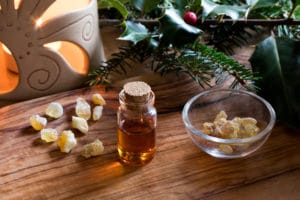 From fresh pine to warm cinnamon, the holiday season is filled with delicious and memory-evoking scents. But perhaps one of the most iconic of Christmastime smells is that of frankincense.

Oftentimes described as a sweet and woody scent with notes of lemon, frankincense is an aromatic resin that’s extracted from the bark of Boswellia trees. Today, the essential oil is used in an array of products including incense, perfume, candles, and even some skin care products. In addition, the smell often permeates churches as an homage to its significance in the nativity story, as well as other biblical references.

But what really gives frankincense its unique smell? Well, that’s where analytical testing and chemical analysis have lent a helping hand.

Sniffing Out the Scents

You see, while classic analytical testing techniques such as thin layer chromatography and gas chromatography mass spectrometry (GC/MS) have wide ranging applications, in this instance they weren’t sensitive enough to identify all of frankincense’s many odorants; some odorants are present in just trace amounts.

— Does your product smell as good as the holidays? Learn how GC/MS analysis can help ensure your product leaves the right impression. —

As a result, a hybrid technique using highly-trained noses and chromatography equipment—chromatography-olfactometry—was used to get results.

“This system splits the output of a gas chromatograph into two different lines: a classic mass spectrometry detector, and a sniffing port, where a researcher can smell and hopefully identify the aroma of every peak,” the article says. “For scientists working in this area, the human nose remains a valuable tool and can be more sensitive to certain smells than lab instruments.”

As it turns out, the distinct smell of frankincense appears to be rooted in trace amounts of two isomers of a rare carboxylic acid—which were identified as cis- and trans-olibanic acid.

“[These] carboxylic acids are highly potent and substantive odorants occurring in ppm amounts in all of the frankincense samples analyzed, even those showing radically different volatile compositions,” the abstract of researchers’ scientific article states. “These cyclopropyl-derived acids provide the very characteristic old churchlike endnote of the frankincense odor.”