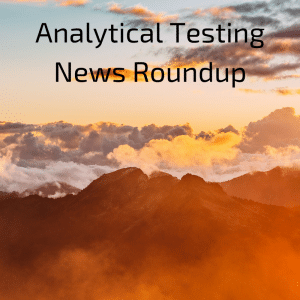 Here we roundup some of the most interesting bits of news and research featuring analytical testing methods such as gas chromatography mass spectrometry (GC/MS) and Fourier transform infrared spectroscopy (FTIR).

University of New Hampshire (UNH) students interested in learning about what it takes to become a commercial beer brewer will soon have the opportunity to get some hands-on experience.

According to Seacoastonline.com, UNH will be debuting a brewing sciences program within the College of Life Sciences and Agriculture this fall.

As part of the program, a pilot brewery is being installed on campus for research and learning, as well as an analytical testing lab—presumably to help students perfect their brews.

“A lot more goes into [making beer] than people realize when they’re drinking a beer,” Cheryl Parker, the university’s first official brewing manager, told the publication. “I’m really excited to be able to teach this art and explain the science behind it to the students.”

A Spanish company is taking the lead on ensuring its produce is free of excessive pesticides and other harmful chemicals.

According to Chromatography Today, Frutas Montosa has opened its own multiresidue laboratory and is using analytical techniques such as QuEChERS, gas and liquid chromatography, and the latest in mass spectrometry, to ensure food security.

Frutas Montosa’s move to open its own lab not only helps them ensure the highest quality foods get to consumers, but also helps future-proof their business as regulations for pesticide residues tighten.

3. FTIR Could Be a Fast, Easy Way to Spot Early Signs of Disease

Researchers with the University of Sydney’s AINST Health and Medicine Flagship Program believe FTIR could help quickly and easily spot early signs of infection and cancer, as well as difficult to diagnose neurological diseases.

According to News-Medical.net, the research team used FTIR to monitor microvesicle-biomolecular changes in white blood cells, which were stimulated with a component of deadly bacteria called lipopolysaccharide. Then they compared the changes to those in healthy, uninfected white blood cells.

Through this process, they discovered there was a “threefold increase” in the number of microvesicles from white blood cells stimulated with the bacteria. In addition, they saw clear biomolecular changes—more lipids and proteins—in the infected cells, the article reported.

“This use of FTIR spectroscopy to analyse microvesicles provides a new way characterize the biomolecular differences in this model of septic shock-induced white blood cell-microvesicle and could easily be applied to other models of microvesicle release, notably in a range of inflammatory diseases,” Professor Peter Lay, the senior author of the study and the University’s School of Chemistry and Vibrational Spectroscopy Core Facility, reportedly said.

4. How Perfume Makers Use GC/MS to Create Intoxicating Scents

Today, perfume makers are hard at work creating delectable scents that we’ll go crazy for. But how do they craft the perfect cocktail of ingredients to make these irresistible fragrances?

Well, GC/MS plays a helpful role, and Innovatech Labs dives into the how and why in a new blog post.

“The trick is ensuring that the mixture will have the desired effect once it’s actually applied to the human body,” the post explains. “And GC/MS allows perfume makers to separate, identify and quantify the aromatic compounds within a sample.”

5. Could Jackfruit Seeds Be a Suitable Substitute for Cocoa Beans?

The demand for cocoa beans is set to outstrip production in the near future, which means chocolate lovers may need to look elsewhere to satisfy their cravings—and scientists are already looking for alternatives.

According to ScienceDaily, a study recently published in the Journal of Agricultural and Food Chemistry revealed that compounds found in jackfruit seeds produce the same aromas as processed cocoa beans.

Researchers made 27 different jackfruit seed flours by acidifying or fermenting the seeds prior to drying. The flours were then roasted for various times and temperatures using processes similar to those used to enhance the chocolaty flavor of cocoa beans, the article said. Finally, GC/MS was used to identify several compounds that are associated with chocolate aromas.

In the end, researchers concluded jackfruit seeds are indeed capable of producing the chocolate aromas—which could provide a potentially cheap and abundant alternative for chocolate manufacturers.