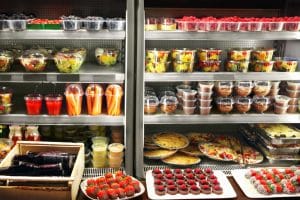 In 1996, Congress directed the U.S. Environmental Protection Agency (EPA) to develop ways to measure the effect certain substances may have on the human endocrine system, including evaluating the risk they may pose and, if necessary, take action to protect human health and the environment. As a result, GC/MS analysis or gas chromatography/mass spectrometry is being used to identify endocrine disrupters, which are leaching from plastic products into our food.

An endocrine disruptor is a substance which alters the function of the endocrine system and consequently causes adverse health effects. According to the American Chemistry Council, many things can impact the endocrine system—stress, food, exercise, pollution, but the impact of chemicals is particularly dangerous to humans.

The EPA’s Endocrine Disruptor Screening Program (EDSP) is focused on screening substances for endocrine related activity and then determining if that activity can cause adverse effects at specific levels of exposure. As a result, research is being conducted that identifies routes of exposure of these substances since they can affect reproductive and developmental processes, especially in children.

One of the major sources of human exposure to endocrine disrupting chemicals (EDCs) is plastic packaging commonly used for food and drink. Bottles, cartons, trays and clear plastic films have all been suspected of transferring EDCs into the very foods that they should be protecting.

Researchers at the Austrian Research Institute for Chemistry and Technology in Vienna combined GC/MS analysis and LC/MS testing (liquid chromatography/mass spectrometry) to detect EDCs. In their study, compounds that migrated from plastic food packaging were tested for estrogen activity and subsequently analyzed to identify estrogen-active chemicals.

In conducting the tests, various packaging and bottle components were acquired from packaging manufacturers and food retailers. Portions of each component were left in contact with food simulants for 10 days at elevated temperatures under conditions selected as the worst case scenario, according to EC regulations.

After the contact period expired, any compounds present in the liquid were extracted by SPE for the yeast estrogen assay then analyzed by GC/MS analysis. The compounds were identified by matching their mass spectra with a commercial library.

The highest activity was found in a composite film sample while the packaging materials manufactured from polymers of a single compound displayed far less estrogenic activity. Researchers concluded that the combination of the yeast estrogenic assay and GC/MS analysis of the food simulant following migration studies offers another way to test plastic food packaging for EDCs.

What industry application could GC/MS analysis help you with?

To stay up to date on GC/MS testing and the latest industry news, subscribe to the Innovatech Labs Resource Center or contact us today.