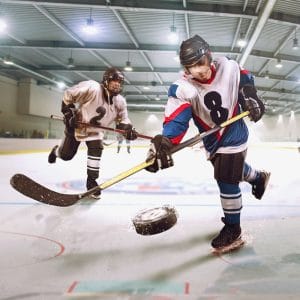 At this year’s Sochi Winter Olympics, the design of the magnificent Bolshoi Ice Dome was inspired by the Fabergé egg. But did you ever consider what lies beneath that ice? It’s either sand or cement.

Innovatech Labs used headspace gas chromatography to study the chemical structure of the materials under one particular ice rink.

According to ice rink experts, many smaller ice rinks utilize sand since it lowers the initial outlay for an ice surface. A cement floor for an NHL ice rink will cost between $50,000 and $125,000 more than a sand floor, depending on the floor strength, proximity of material, and contractor costs.

Innovatech Labs was contacted to solve one of these sandy problems. The customer was experiencing an issue with the integrity of the paint used in the construction of the ice sheets. It was thought that the sand may have been contaminated with a solvent which was having an adverse effect on the paint.

Utilizing static headspace analysis, the lab sought to discover whether the sand contained residual solvents, such as acetone or alcohol.

“Headspace” is the gas space above the sample in a chromatography vial. Volatile sample components diffuse into the gas phase, forming the headspace gas. Headspace analysis is therefore the analysis of the components present in that gas.

In static headspace analysis, a liquid or solid sample is placed into a vial, sealed and heated to a specific temperature. All of the components that are volatile at or below the pre-set temperature escape from the sample to form a gaseous “headspace” above the sample.

The term “static headspace” refers to the sealed environment in which the outgassed products are collected.

Headspace gas chromatography revealed that sand from areas of the ice rink which showed the worst issues with paint integrity contained the highest levels of the solvents.

To stay up to date on headspace analysis and the latest industry news, subscribe to the Innovatech Labs Resource Center.