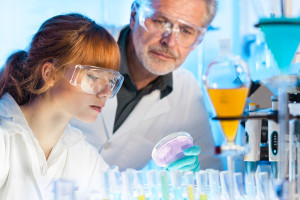 GC/MS analysis (gas chromatography mass spectrometry) is solving drug crimes. When a prosecutor approached Swiss forensic scientists for help in solving a criminal case, they turned to GC/MS analysis to discover the chemical components in hashish.

Police had seized two separate blocks of hashish, one from the apartment of a known dealer, the other from a suspect‘s residence. They needed to know if the two seizures had come from the same block before it was split.

Researching drug literature, the scientists discovered that many reports described the chemical profiles of cannabis, also known as marijuana, but there was little chemical information on hashish. Although both drugs originate from the same plant, Cannabis sativa, hashish and cannabis are different types of drugs. According to the scientists,  the chemical testing applied to cannabis wouldn’t be effective for hashish because the chemical compositions of the two drugs is different.

The scientists, Julian Broséus, Liv Cadola and Pierre Esseiva, based at the University of Lausanne,  developed a method that would allow them to characterize and compare different seizures of hashish. Basing their method on a procedure that is applied to other illegal drugs, like heroin and cocaine, they utilized GC/MS analysis to profile the hashish components.

Performing GC/MS analysis on a quadrupole mass spectrometer with electron ionization, the various hashish components were identified by comparison with a commercial mass spectral database. Sixteen compounds that were present in all of the samples at relatively high intensities were chosen as a starting set for comparing the hashish seizures.

GC/MS analysis revealed that seven were considered the best for comparison of these compounds. Six of them were cannabinoids, like cannabidiol, cannabinol and delta 9-tetrahydrocannabinol and the seventh was a minor hydrocarbon known as nonacosane. Using these compounds, the scientists built a statistical model that allowed the hashish blocks to be compared.

Utilizing this model, the GC/MS analysis established that the two hashish samples were from the same batch. Case solved.

Do you have a difficult material analysis case that you need solved for your industrial business?