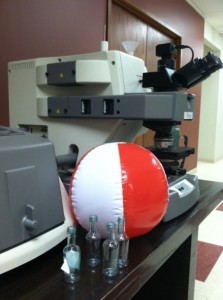 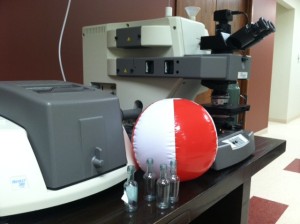 The labels were peeling from the bottles shown in the picture above.  The customer wanted to know the cause of the poor adhesion to the bottles. The ideal materials testing method for failure analysis is FTIR testing. Several bottles from the failing lots and several bottles from prior lots that showed good label adhesion were submitted.  The bottles were rinsed with a solvent selected to minimize the impact on the polymer comprising the bottles.  The solvent was collected and evaporated, and then the resulting residues were analyzed using Fourier Transform Infrared Spectroscopy (FTIR) testing. Silicone, residual mold release from forming the bottles, was seen in both the good and bad samples; however the level of silicone on the bad samples was over three times what was seen in the bottles with good adhesion.  The increased level of silicone was causing poor adhesion to the bottles.  The customer tightened controls on the amount of mold release used in the manufacturing of the bottles and the adhesion issues were solved.

These beach balls had been manufactured in China.  Before shipping the product to California, the customer needed to confirm that the material used in the manufacturing of the balls was not polyvinyl chloride (PVC) and that the materials were phthalate free. FTIR analysis was used to analyze the ball material and the valve stem/plug materials.  Both materials were heavily plasticized.  To remove the plasticizer, each material was soaked in Isopropanol (IPA).  The materials were analyzed after the soak and the base polymers were identified as PVC. To confirm the presence of a halide, a copper flame test was performed as well.  The flame burned green, indicating a halide, (chlorine, in this case) was present.

The plasticizer extracted from the materials was analyzed using FTIR testing as well.  The plasticizer was identified as dioctyl terephthalate (DOTP).  Although the name sounds like a phthalate, only ortho-substituted phthalates (substitutions at positions 1 & 2 of the benzene ring) are considered “phthalates” in terms of health and environmental issues.  DOTPis a para substituted compound, (substitutions at positions 1 & 4) and is considered to be a phthalate free plasticizer.

Want to learn more interesting facts about FTIR testing? Read this blog to learn how scientists are using FTIR to find answers to a number of questions about the planet Mars.