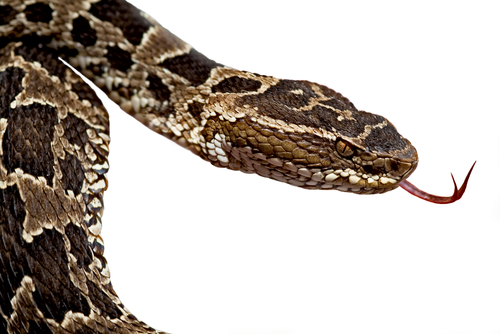 Ion chromatography has been playing with snakes.

Ion chromatography is the separation and quantification of negative and positive ions (anions and cations) using high performance liquid chromatography. Researchers from the Razi Vaccine and Serum Research Institute in Iran, led by Hossein Zolfagharian, have been utilizing this materials analysis technique to study the effects of snake venom from the saw-scaled viper.

The Planet’s Most Dangerous Snake

The saw-scaled viper family, Echis, is considered to be the world’s most dangerous snake because of its abundance near cultivated areas, its aggressive, easily excitable temperament and its highly toxic venom.

Echis venom causes coagulopathy, a disease or condition affecting the blood’s ability to coagulate. A bite from the saw-scaled viper can result in symptoms ranging from lack of blood clotting, hemorrhage, renal failure and stroke.

Terri A. Elsbernd, R.N., pediatric trauma coordinator at Mayo Clinic in Rochester, Minnesota, says that although it can prove challenging for emergency nurses, early identification of coagulopathy in patients with multisystem injuries is crucial. “Patients who have coagulopathy are four times more likely to die than those who don’t,” she said.

In splitting the venom using ion chromatography, researchers discovered that the venom contained both coagulants and anticoagulants. These may be a source of potent drugs to treat human disease.

The saw-scaled viper venom has already benefited medicine. Aggrastat, a “super aspirin” that prevents blood clots, was introduced in 1998 by Merck & Co. Merck built the Aggrastat molecule to mimic the snake venom’s anti-clotting effect, minus the toxins.

“There are a number of toxins found in venom that have evolved to target vital processes in the body, and they appear to have a lot more selectivity than many drugs,” notes Wayne Hodgson, a snake venom researcher at Australia’s Monash University. He and his colleagues have been studying sea snake venom with the hope of finding toxins that target particular brain cells involved in learning and memory. “We think neurotoxins might be useful for working out what is happening in the brains of people with memory disorders such as Alzheimer’s,” Hodgson said.

Innovatech Labs, a leading IC lab, uses ion chromatography to identify and quantify the levels of ionic materials present on manufactured devices for a variety of industries. Ion chromatography testing can be an essential tool for guaranteeing quality control. It is a proven test to determine the ionic cleanliness of a product following the manufacturing process.

To stay up to date on IC analysis and the latest industry news, subscribe to the Innovatech Labs Resource Center or contact us today.