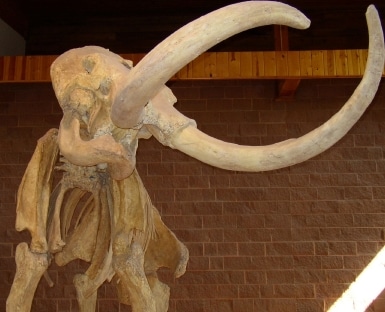 Using ultra-high resolution gc/ms analysis, bio-archaeologists from the University of York and Manchester successfully extracted protein from the bones of a 600,000-year-old mammoth. (Mass spectrometry is a process used to identify chemicals in a substance by their mass and charge.)

The archeological breakthrough represents another chapter in a story that began over 20 years ago on the shores of the North Sea in West Runton, Norfolk,  two and a half hours northeast of London.

On December 13, 1990, local Norfolk residents, Harold and Margaret Hems, were enjoying a walk on the beach. Jutting out at the bottom of the cliffs, a large bone caught their eye. The Hems contacted the Norfolk Museums Service who later identified it as a pelvic bone of a huge elephant.

In 1995, during a three-month excavation, over 80 pieces of the mammoth’s skeleton were unearthed. Representing an 85 percent complete skeleton, it is the most perfect and extraordinary example of its species ever found.

Fast forward to 2011, when The Centre for Excellence in Mass Spectrometry at the University of York carried out the collagen sequencing. Collagen is the main structural protein found in animal connective tissue. Mass spectrometry revealed that these were arguably the oldest proteins ever sequenced.

Dr. Mike Buckley, from the Faculty of Life Sciences at the University of Manchester, commented, “What is truly fascinating is that this fundamentally important protein, which is one of the most abundant proteins in most (vertebrate) animals, is an ideal target for obtaining long lost genetic information.”

The cutting-edge GC/MS procedure means paleontologists will be able to name and date species which they previously thought impossible.

The University of York’s Bio-Archaeologist, Professor Matthew Collins, marveled that, “The time depth is absolutely remarkable. Until several years ago we did not believe we would find any collagen in a skeleton of this age.”

“The implications are that we can use collagen sequencing to look at very old extinct animals. It also means we can look through old sites and identify remains from tiny fragments of bone,” he added.

This cutting-edge scientific research into the protein configurations of an ancient wooly mammoth puts into perspective the broad reach of mass spectrometry in enhancing human knowledge.

If you are taking a trip to London you can “discover” the West Runton elephant for yourself. There are several bones of the skeleton on display at Cromer Museum, along with other fossils from various time periods represented by the geological deposits of Norfolk. Check out the huge lower jaw of the Wooly Mammoth at the 892 year old Norwich Castle.

Innovatech Labs offers GC/MS testing and analysis for a many unique sample types. Contact us to learn more.

To stay up to date on GC/MS testing and the latest industry news, subscribe to the Innovatech Labs Resource Center.