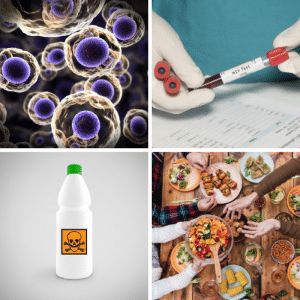 Fourier transform infrared spectroscopy (FTIR) has origins that date all the way back to the early 19th Century, when Sir William Herschel first developed prism-based techniques for measuring IR spectra. Today, FTIR testing and analysis has become go-to quality assurance measure for manufacturers, as well as a scientific tool for everything from crime scene investigation to identifying gemstones.

Why? Because FTIR testing can determine a sample’s molecular composition and structure, making it a simple and fast tool for identifying unknown materials or contaminants.

In this post, we highlight some of the most interesting and surprising uses for FTIR testing and analysis, to give you a better look at how versatile and accurate this analytical testing technique can be.

Diamonds are some of the most sought-after gemstones on Earth, with many consumers willing to pay top-dollar for the most brilliant stones. As a result, the jewelry industry has a duty to ensure their customers get what they pay for—and that’s how FTIR can help.

Diamonds are classified by types Ia, Ib, IIa and IIb, with most natural diamonds being type Ia. Each type has distinct differences in chemical composition—making FTIR analysis a useful tool for determining diamond type. For example, Ia diamonds contain abundant nitrogen in clusters or pairs—something that cannot be grown artificially. On the other hand, type IIa diamonds contain almost no nitrogen.

In addition, FTIR analysis can be paired with other tools to help root out imitation or synthetic lab-grown diamonds.

While HIV was once considered a death sentence, thanks to modern medicine it’s now possible for those with the disease to live a full and happy life. However, the treatment process can have serious side effects and close metabolic monitoring is needed.

Olive oil adulteration has become a particularly pervasive problem. But with FTIR’s ability to identify both organic and inorganic materials on the surface of a sample, it has been used to detect suspicious functional groups within olive oil.

The use of FTIR in medical research is growing rapidly—particularly in helping detect and diagnose different forms of cancer.

Back in 2009, the U.S. Chinese Journal of Lymphology and Oncology published a paper stating that after decades of research, FTIR could now be used to probe biochemical changes of normal and abnormal cells.

“In general, FTIR spectroscopy has a number of advantages over other diagnostic techniques. It is relatively cheap. It requires no tissue/cellular fixation and it is not dependent upon human judgment to detect cellular/molecular changes,” the paper states. “It can detect changes earlier than changes seen under light microscopy as cell biochemistry precede any morphological manifestations.”

Since then, several other studies have been conducted on the viability of FTIR analysis for detecting specific types of cancers such as prostate and breast cancer.

For nearly three decades, the Canadian Department of Food Science and Agricultural Chemistry has been exploring the molecular composition of food items. One of the department’s most groundbreaking projects to date has involved using FTIR to identify food-borne pathogens.

“Every organism has an infrared signature that is as unique as a human fingerprint,” Ashraf Ismail, associate professor in the department, said in an article.

The goal? Detect spoiled food as soon as possible so people don’t eat it and get sick. Ultimately, the research team is working to scale its FTIR technology into a handheld device that could be used in the real world.

Consumers are becoming increasingly aware of the health risks that toxins in plastic products can pose. As a result, many manufacturers are using FTIR analysis as a quality assurance tool to detect whether harmful contaminants have made their way into products.

For example, a company wanted to make sure that a shipment of beach balls from China were free of polyvinyl chloride (PVC) and phthalates before sending them out to be sold. FTIR analysis revealed the beach balls did in fact contact PVC. As a result, the company decided not to ship the product—and avoided a potentially damaging product recall.

FTIR analysis is proving to be an increasingly versatile analytical testing method, crossing the bounds of scientific fields and industries. Stay up to date on the latest news and innovations by reading our blog.

If you’re looking for FTIR testing and analysis services in the manufacturing realm, get in touch with us today.