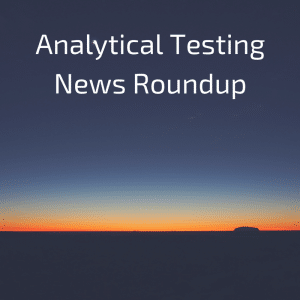 Here we roundup some of the most interesting and cool bits of news and research featuring analytical testing methods such as Fourier transform infrared spectroscopy (FTIR) analysis and gas chromatography mass spectrometry (GC/MS)in action:

Phthalates are classified as anti-androgen endocrine disruptors, which affect the action of male hormones. As a result, steps have been taken in recent years to restrict their use in items such as toys and childcare products, according to SeparationsNow.

“It should be possible to use this method at a greater number of locations, thus allowing studies on the effects of phthalates to enroll more subjects, giving a clearer picture of health effects,” the article said.

According to Chromatography Today, mammograms can sometimes miss the signs, as well as expose the recipient to radiation that could be harmful—hence the need for alternative screening tests.

The results? While in the early stages of this kind of research, the team found over 120 different lipids in the cells they studied. But more importantly, they were able to identify patterns that were specific to the cancer cells.

3. 4 Examples of FTIR Analysis at Work in the Manufacturing Industry

In a new post, Innovatech Labs explores how the versatile technique is used by manufacturers in a variety of industries, as well as showcases specific examples.

4. Analytical Tools & Techniques Are Reshaping the Study of Ancient Humans

Archaeologists and paleontologists are going beyond collecting and measuring bones and stone artifacts to learn more about our ancient ancestors.

According to Boston University News Service, bioarchaeologist Ainara Sistiaga is spearheading a new wave of scientists using an array of analytical methods, such as mass spectrometry or gas chromatography, to paint a more accurate picture of human evolution.

“The new information they are unearthing is challenging long-held notions about our extinct ancestors, including Neanderthals and other human species,” the article said. “They are also providing accurate measurements of the climate, abundance of vegetation and presence of water in prehistoric times in places like Olduvai [Gorge in Tanzania].”

5. Researchers Uncover the Compounds Responsible for the World’s Stinkiest Fruit

A group of researchers at the Technical University of Munich in Germany have uncovered the compounds that give durian fruit its legendary stench.

According to Chemistry World, while the durian fruit has a sweet taste, it’s odor is vile—often being compared to raw sewage.

To uncover the culprits, researchers used a combination of GC/MS and aroma extract dilution analysis, finding 16 compounds that were present in high enough concentrations to contribute to the smell.

But, according to the article, it took just two of those potent volatiles—fruity ethyl (2S)-2-methylbutanoate and oniony 1-(ethylsulfanyl)ethane-1-thiol—to recreate the overall odor.