You are here: Home / Newsroom / FTIR Spectroscopy Blog Posts / 4 Examples of FTIR Testing at Work in the Manufacturing Industry 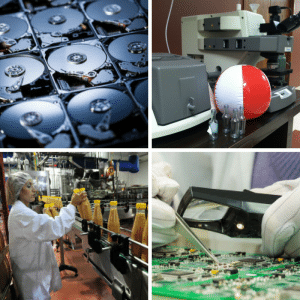 If you’re unfamiliar with how FTIR analysis works, it is used to identify organic and some inorganic materials through the application of infrared radiation (IR). For manufacturers, this technique can be used to identify unknown materials or contaminants that can or have affected product quality, function or safety. It’s also a technique that’s often used by researchers and scientists in the development of new products.

FTIR testing applications are many, including:

Because it’s so versatile, FTIR analysis can be used to test epoxies, paints, oil coatings, fabrics and more.

Below we give you a peek at this versatile analytical testing technique in action.

For medical device, electronics and other similar manufacturers, particle or fiber contamination can prevent products from functioning properly or pose potential safety risks. FTIR testing is able to identify small particles or fiber contaminants quickly and with minimal or no damage to the sample via fiber analysis. Once the contaminants are identified, the source can then be located and eliminated.

As an example, a medical device company discovered unknown fibers in its plastic packaging trays. FTIR analysis was able to identify those fibers as a cellulose-based cardboard. The company was then able to trace the fibers back to cardboard dividers that were being used on the processing line and switch to new dividers.

In addition to particle and fiber contamination, residues left behind during the manufacturing process can also inhibit product function or raise safety concerns. FTIR’s ability to analyze organic and inorganic materials allows for identification of residue contamination and the source.

For example, a manufacturer found a white residue in the crevices of a molded plastic part. An FTIR Spectrometer was used to analyze the sample and the residue was identified as a surfactant—a compound that can be used as a detergent, wetting agent, emulsifier, foaming agent or dispersant during the manufacturing process.

A sample of the surfactant used by the manufacturer was then analyzed, compared to the sample from the plastic part, and found to be a match. 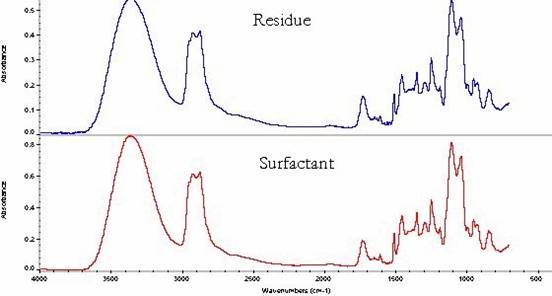 In addition, FTIR testing is gaining speed as a way to pinpoint sources of food contamination, helping scientists and researchers uncover microorganisms on finished products and trace them back to various steps in the production process.

From product parts to packaging, plastics play a huge role in manufacturing as well as our daily lives. But in recent years, companies and consumers have grown worried about potentially harmful toxins in manufactured plastics. FTIR analysis is one analytical technique that can be used to identify toxins and contaminants in inorganic samples.

For example, a company wanted to make sure that a recent shipment of beach balls was free of polyvinyl chloride (PVC) and phthalates before sending them off to be sold. FTIR analysis determined that the beach balls did in fact contain PVC, which allowed the company to protect its customers and avoid a product recall.

Beyond identifying toxins in plastics, FTIR testing can also be used as a failure analysis tool.

For example, a plastic part had fractured during use. To determine the cause, lab technicians analyzed a sample of the “bad” part and a sample of a “good” part using FTIR. In the end, results showed that there was not enough plasticizer present in the “bad” part.

A product is only as good as the sum of its components. As a result, many manufacturers use reverse engineering and materials analysis to create or choose the best possible components for their products—and FTIR can help.

For example, food producers often use plastic packaging to seal in freshness and properly preserve their foods. As a result, food packaging is often comprised of multiple layers with each layer serving a unique purpose.

FTIR, coupled with microscopy, can be used to determine the materials used and the thickness of each layer. In turn, this could help food producers choose the right packaging for their product, or also analyze a sample from the competition to gain insight and a competitive edge.