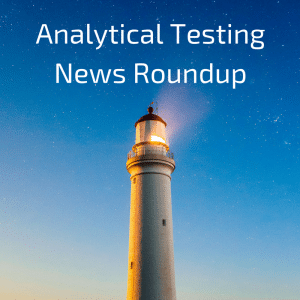 Analytical testing techniques are used by scientists and researchers all over the world to make interesting and groundbreaking discoveries.

Here we roundup some of the most interesting and cool bits of news and research featuring analytical testing methods such as FTIR analysis and gas chromatography mass spectrometry in action:

Decades of commercial growing have transformed the once sweet taste of tomatoes. Now, a new study from horticultural scientists at the University of Minnesota-St. Paul has uncovered which flavor-genes have been lost over the years.

According to Science Magazine, scientists sequenced the genomes of 398 tomato varieties. They also conducted consumer panels and taste tests over the next few years, recording which tomatoes people liked most. The researchers used gas chromatography to dig into the flavor compounds.

“They zeroed in on chemical compounds known as volatiles that are released as we chew and trigger a response in the olfactory system, contributing to overall taste sensation,” the article said. “Comparing the consumer panels’ tomato preferences to their chemical profiles, the team came up with a list of 13 chemical compounds strongly linked to likability.”

As it turns out, the right mix of volatiles can give the perception of sweetness without sacrificing fruit size or yield, according to the article.

Researchers have found that humans and alcohol go way back—at least 9,000 years to be exact. But what’s even more impressive, is that some of the ancient libations are being recreated with the help of analytical chemistry.

According to a recent Daily Mail article, “alcohol archaeologist” Dr. Patrick McGovern has used a number of analytical techniques such as liquid chromatography, gas chromatography and mass spectrometry (GC/MS) to analyze residues and uncover ancient recipes.

“The first drink that he recreated is named the Midas Touch, and is based on molecular evidence from residues found inside a Turkish tomb, believed to have belonged to King Midas, dating back to 700 BC,” the article reported.

Researchers at NASA’s Jet Propulsion Lab (JPL) have reportedly crafted a simple chemistry-based way to test for signs of life on other planets.

According to a JPL release, their study recently published in Analytical Chemistry highlights a new test that’s specifically designed to look for the building blocks of life on Earth: amino acids.

The test uses a liquid-based technique known as capillary electrophoresis to separate a mixture of organic molecules into its components.

“Our method improves on previous attempts by increasing the number of amino acids that can be detected in a single run,” Jessica Creamer, lead author and postdoctoral scholar at JPL, said in the release. “Additionally, it allows us to detect these amino acids at very low concentrations, even in highly salty samples, with a very simple ‘mix and analyze’ process.”

Ninety thousand U.S. men and women are diagnosed with colorectal cancer and 50,000 with the condition die each year. But many of those deaths are preventable—and an Israel-based biotech company is trying to help by leveraging FTIR analysis.

According to Nasdaq.com, TODOS Medical is in the early stages of testing Fourier transform infrared spectroscopy (FTIR) analysis as an accurate way to determine if a blood sample is or isn’t cancerous.

“Cancerous blood samples have a different atomic structure than non-cancerous samples, and the light reacts differently,” the article said. “The results of the test can then be fed through a computer, and the computer (by way of a piece of technology that TODOS has developed) determines whether the sample is cancerous or not.”

While TODOS is early in the development stage, according to the article, initial tests have demonstrated a high degree of accuracy when compared to colonoscopy analysis data.

5. Why Particle Size Distribution Should Matter to Manufacturers

Particle size distribution is important for understanding the physical and chemical properties of a material, making it a great cleanliness and quality assurance tool for manufacturers across a variety of industries.

In a new post, Innovatech Labs defines what particle size distribution is, how it’s measured and why it matters to manufacturers.