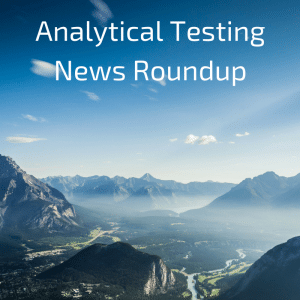 Scientists, researchers and companies all over the world use analytical testing and chemistry techniques every day to make interesting, groundbreaking discoveries.

Here we round up some recent interesting and cool bits of news and research featuring traditional analytical testing methods such as GC/MS and infrared spectroscopy, as well as emerging techniques, too.

1. Craft Brewery Infuses its Beer with a Hint of Wu-Tang Clan

A Cary, NC craft brewery is infusing one of its brews with the musical flavors of Wu-Tang Clan.

According to Munchies, to create its “Bring da Ruckus” brew, Fortnight Brewing played the East-Coast rap group’s lyrical melodies in the fermentation tank for two weeks—hoping to use sonic vibrations to “stress out the yeast” and alter the flavor, complexion and character of the beer.

Apparently the trend of brewers and distillers using music to alter or enhance the flavor of craft alcohol isn’t entirely new—nor is the use of Wu-Tang Clan classics, the publication said.

But does it actually work? Various analytical techniques including gas chromatography mass spectrometry (GC/MS) and liquid chromatography were used to analyze beer samples—Bring da Ruckus and another brew that uses the exact same recipe minus the music.

The results? While there is no concrete evidence to show the music had an effect, the two beers did indeed have chemical differences.

Researchers have reportedly developed a faster and cheaper way to quantify antioxidant levels in chocolate, which could help chocolate companies create products that appeal to more health-conscious consumers.

According to Science Daily, food scientists at the University of British Columbia are using infrared spectroscopy to record the chemical composition of each sample, including the amount of polyphenols, which are micronutrients with high antioxidant properties.

“Our method predicts the antioxidant levels in chocolate in under a minute, compared to the industry standard that can take several hours or even days,” Xiaonan Lu, who co-developed the method, reportedly said. “It’s not a substitute for the traditional method used at the moment, but it does show a strong correlation for being just as reliable.”

According to a release from the United States Department of Agriculture’s Agricultural Resource Service, acrylamide is formed in potatoes and other foods when fried, roasted or baked at high temperatures.

Traditional methods for detecting the potential carcinogen requires sophisticated analytical techniques that take time and expensive equipment, the release said. But the new model could speed the process up, while also reducing the average testing cost from $250 to $25 per sample.

4. GC/MS Used to Study the Aromatics of Bacchus Wine

What makes up the distinct aroma of Bacchus wine? A recent study by Flint Vineyard winemaker Ben Witchell and wine laboratory Campden BRI aimed to find out.

According to The Drinks Business, the research team used GC/MS to analyze 19 different English Bacchus wines, as well as 6 non-Bacchus wines for comparison.

The study revealed a number of interesting findings.

“One of the most abundant aromas picked out by the analysis was hotrienol, a strongly aromatic terpene,” the publication reported. “This is commonly found in German varieties such as Riesling and Gewürztraminer and can have a sweet, basil-like, lime or grapefruit peel aroma, Witchell explained. These are all common descriptors for Bacchus.”

5. The Future of Food: How Analytical Techniques Are Changing Our Food

From veggie burgers that taste, smell, cook and look like real beef to transforming water into wine, the way we “grow” and create the foods we eat is changing—and analytical chemistry and its techniques are playing a major role.

Innovatech Labs takes a look at some of the companies using analytical techniques to engineer new products, and why they’re doing it.