You are here: Home / Newsroom / Articles on Ion Chromatography / The Future of Food: How Analytical Techniques Are Changing Our Food 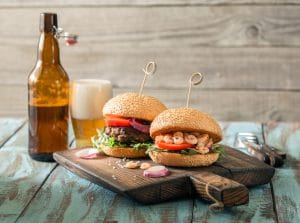 From veggie burgers that taste, smell, cook and look like real beef to transforming water into wine, the way we “grow” and make food and drink is changing—and analytical chemistry techniques are playing a major role.

“The future of food is synthetic,” Alec Lee, co-founder of Ava Winery, said in a recent interview with the Napa Valley Register. “Producing synthetic food is basically the next technology boom. Food tech is going crazy right now.”

If you recall from one of our recent Analytical Testing News Roundups, Ava Winery is creating “designer wines” that are all water based. That’s right. No grapes in sight. How? By studying and identifying the molecules in some of our favorite wines with the help of gas chromatography mass spectrometry (GC/MS), which is an analytical testing technique that’s used to separate, identify and quantify compounds.

As mentioned in the opening, one company recently created a meatless burger that not only looks and tastes like beef, but also cooks and smells like it, too. That company is Impossible Foods.

According to Chromatography Today, GC/MS also played a role in Impossible Foods’ research and development of the “Impossible Burger.” The technique was used to help uncover what aromatic components a traditional beef burger gave off while cooking.

The video below highlights the company’s mission and its research.

In addition, the company isn’t stopping with the Impossible Burger. According to the Impossible Foods website, their team of scientists and food researchers are also working on other meat types like chicken, pork and fish, as well as dairy items.

Why Reinvent the Food Wheel?

So, why are companies like Ava Winery and Impossible Foods trying to reinvent food?

For Impossible Foods, they’re mission is to transform the global food system to create foods people love, but are more sustainable and healthy.

“The world loves meat. But relying on cows to make meat is land-hungry, water-thirsty, and pollution-heavy,” the company’s website states. “That’s why we set out to do the impossible: make delicious meats that are good for people and the planet.”

As for Ava Winery, their original mission was to make great but expensive vintages accessible to all, as well as push the food tech envelope. But Lee also sees the sustainability and health benefits.

“It takes 500 to 1,000 liters of water to make 1 liter of wine, and the impact on the environment can be significant,” he told the Napa Valley Register. “Production of tech food is often low-cost, can match or surpass its natural counterparts in taste, nutrition and sustainability, and can be made anywhere and at any time.”

Analytical chemistry techniques are also helping food and drink producers get a little creative with their products.

According to Baltimore Magazine, the Aquarium’s water quality experts sourced a water sample from Chesapeake Bay and ran it through ion chromatography—which is used to draw qualitative and quantitative conclusions about a material’s composition—to get a breakdown and blueprint of the salt and mineral content. The brewers then used that information to replicate the water and sea salt for ingredients in the beer.

All in all, a number of companies are challenging the conventional ways we grow, eat and think about food, and analytical chemistry techniques are helping pave the way.

To learn more about how analytical testing techniques are being used to create new foods, as well as how they’re being used in other scientific research, come back each month to read our Analytical Testing News Roundup.