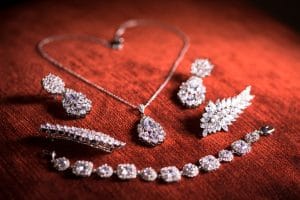 Diamonds are often touted as some of the most beautiful, elegant and sought-after gemstones on Earth, with many consumers paying top-dollar for the most brilliant stones.

But have you ever wondered what actually makes a diamond a diamond? Or how gemologists are able to identify the real deals?

Fourier transform infrared spectroscopy (FTIR) analysis is a go-to technique in the jewelry world for classifying diamonds, and can also be a helpful tool for spotting synthetics.

FTIR analysis is an analytical testing technique used determine a sample’s molecular composition and structure through the application of infrared radiation (IR).

How Do Gemologists Use FTIR?

To answer this question, we need to dive a little deeper into the history of diamond classification.

According to GIA — the world’s foremost authority on diamonds, colored stones and pearls — scientists began to recognize that certain types of diamonds possessed many similar features in the 1930s.

“They grouped the diamonds into two main categories called type I and type II based on differences in transparency under ultraviolet radiation,” GIA explains. “Scientists were able to further divide type I and type II diamonds into two subcategories by the arrangement of carbon — and impurity — atoms in the diamond structure. In 1959 they discovered that nitrogen was the principal chemical impurity in diamond and that while type I diamonds contained this impurity, type II diamonds did not.”

Today, diamonds are classified by types Ia, Ib, IIa and IIb. Most natural diamonds are type Ia. According to GIA, these diamonds contain abundant nitrogen in clusters or pairs and cannot be grown artificially. There are also type Ib diamonds, which are very rare in nature. These diamonds contain scattered and isolated nitrogen atoms that are not in clusters or pairs. As for IIa and IIb diamonds, the former contains almost no nitrogen and the latter contains boron.

With that said, given the notable differences in chemical composition, FTIR — also referred to as infrared spectroscopy — can be used to determine diamond type.

Can FTIR Be Used to Identify Fake Diamonds?

As far as most people are concerned, fake diamonds are anything that was not naturally produced by the earth. But there are different types of so-called fakes.

According to GIA, there are imitation diamonds, such as cubic zirconia or synthetic moissanite, and synthetic diamonds, which are lab-grown under conditions that mimic that of natural diamonds.

Imitation diamonds have very different chemical and physical properties, making them easy to spot. Synthetic diamonds, however, are much more difficult to detect, according to GIA.

While GIA points out that many trained gemologists can recognize synthetic or treated diamonds with standard gem-testing equipment, in some cases more advanced scientific instruments and techniques are needed — especially now that technology is helping produce better quality synthetic diamonds.

As for whether FTIR is a viable method for identifying “fakes”, the short answer is yes.

As mentioned above, imitation diamonds have distinctly different chemical and physical properties. Most gemologists would be able to spot these without using FTIR, but FTIR would certainly provide solid evidence.

When it comes to synthetic diamonds, things can get tricky. While FTIR has been a standard practice in many gem labs, using it as a standalone test may not be wise. According to GIA, synthetic diamonds often correspond to Ib, IIa and IIb diamond types. This coupled with the fact that synthetic diamond quality is improving, standard equipment (and techniques like FTIR) may not be enough to detect lab-grown diamonds. At GIA, gemologists use several kinds of testing equipment including a refractometer, an ultraviolet fluorescence lamp, a binocular microscope, a polariscope and others.

Want to know more about FTIR analysis? Explore our FTIR Spectroscopy page for a look at other uses, advantages and disadvantages, and more.