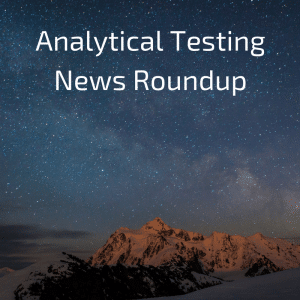 Scientists, researchers and companies all over the world use analytical testing techniques every day to make interesting, groundbreaking discoveries.

Here we round up some recent interesting and cool bits of news and research featuring analytical testing methods such as GC/MS and HPLC.

1. How Does Food Affect Our Brains?

We’ve all wondered why we can’t seem to stop eating delicious yet fatty foods. Well, according to Chromatography Today, chromatography and animal biotechnologist Asha Abraham may have some answers.

According to the publication, Abraham has been investigating the so-called “metabolic syndrome,” which is thought to affect nearly one-third of the world.

“Weight gain in the abdominal region, cardiovascular issues, high-fat profile, blood sugar and high blood pressure are all related to metabolic syndrome,” the article said. “It’s a group of symptoms that interlink — as they all feed into each other making the overall effect worse than might be anticipated. But it’s only recently that they have been considered this way.”

Abraham’s project focused on looking for the common link between symptoms—and found one. Of course, an analytical testing method, high performance liquid chromatography (HPLC), was an important part of the project.

A new type of drug was recently discovered under the guise of instant coffee powder in Taiwan, and gas chromatography mass spectrometry (GC/MS) is being used to learn more about the drug’s properties.

According to The China Post, 6-methoxy Methylone and other banned narcotics were confiscated by the Taipei Police Office in August. With little being known about the physiological and toxicological properties, the FDA is working closely with police offices to examine the toxicological compounds using GC/MS.

3. The Smell of Christmas: Scientists Identify the Mystery Molecules in Frankincense

Christmas will be here before you know it and one of the most recognizable smells you may encounter in church is frankincense. But what gives this aromatic tree resin its distinct smell? Scientists have used chromatography-olfactometry to figure it out.

According to Chemistry World, the chromatography-olfactometry “system splits the output of a gas chromatograph into two different lines: a classic mass spectrometry detector, and a sniffing port, where a researcher can smell and hopefully identify the aroma of every peak.”

The result was the identification of two specific molecules.

4. Learning More About the Effects of Addiction Through Ants

Scientists and researchers are looking to learn more about how drug addiction affects the brain, as well as society through the study of addicted ants, according to Chromatography Today.

“Traditionally, researchers have used rats to overcome this,” the publication reported. “Rats and humans are similar in some physiological responses to drugs — but are markedly different socially. But ants are socially similar to us — so the team realized that if ants become addicted to drugs they would make a good subject to study when investigating drug addiction in society.”

During the study, two groups of ants were given bowls containing sugar-water, with the concentration being lowered over four days. But one group of ants had another component in their water that was not lowered: morphine. The team then used HPLC to check the dopamine levels in the ants’ brains.

5. Analytical Testing in Action: Watch and Learn How Different Techniques Are Used

Analytical testing techniques are used by a variety of different industries to uncover contamination or quality issues, as well as reveal the material composition to further the development of their products.

Discover a handful of interesting videos that show analytical testing techniques in action.