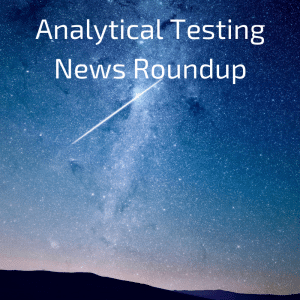 Scientists, researchers and companies all over the world use analytical testing techniques every day to make interesting, groundbreaking discoveries.

Here we round up some recent interesting and cool bits of news and research featuring analytical testing methods such as FTIR analysis and gas chromatography in action.

Archaeologists in Denmark recently uncovered evidence of a 3,000-year-old cooking mistake that shines some light on the daily lives of Scandinavian Bronze Age people.

According to Seeker.com, a clay pot—in near perfect condition—with a white-yellow crust inside was excavated in central Jutland, Denmark. Gas chromatography was used to determine that crusty substance.

“We analyzed three samples via gas chromatography at the laboratories of the Danish National Museum in Copenhagen. It emerged the fats were probably bovine,” archaeologist Kaj F. Rasmussen told the website.

Rasmussen further speculated that the bovine fat could represent a failed cheese-making attempt.

2. New Device Could Improve the Taste of ‘Healthy Food’

Scientists may be getting close to a breakthrough that would allow consumers to enjoy all the naughty, sugar-loaded foods such as cookies and cakes—without the sugar rush.

According to an American Chemical Society (ACS) press release, a new device called a Gas Chromatograph-Olfactometry Associated Taste (GC-OAT) allows scientists to screen real foods and isolate odor compounds. With that information in hand, scientists believe the aromatic molecules could be used to “trick our brains into believing that desserts and other foods contain more fat, sugar or salt than they actually do.”

Researcher presented their work at the 252nd National Meeting & Exposition of the American Chemical Society.

Scientists in China have developed a rapid test that can identify adulteration of agarwood, which is a botanical found in expensive perfumes and traditional Chinese medicines, according to SecuringIndustry.com.

The wood from the Aquilaria sinensis plant is frequently subject to “economically-motivated adulteration,” the website said, as it’s becoming more scarce due to habitat loss. But using Fourier transform infrared spectroscopy (FTIR) coupled with two-dimensional (2D) correlation analysis, scientists can tell the difference between real and fake samples.

According to Chromatography Today, scientists may have found a way to help humans repel mosquitoes that are potentially carrying Malaria. The answer could be as simple as smelling like chicken.

While trying to figure out who or what mosquitoes like to bite most, scientists collected mosquitoes from three villages in Ethiopia. After analyzing the blood inside mosquitoes, the most interesting discovery was that they avoided feeding on chickens—despite their pretty high abundance.

Innovatech Labs has received a number of inquiries wondering if GC/MS would be able to detect natural gas leaks in their home.

In this blog post, we dive into whether or not GC/MS is a viable option for this sort of application, as well as other tips for handling natural gas leaks.