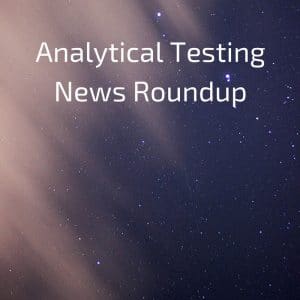 Analytical testing techniques are being used every day by scientists and researchers all over the world to make interesting and groundbreaking discoveries.

Below we roundup some of the most interesting and cool bits of news and research featuring many analytical testing methods in action.

1. A Veggie Burger that “Looks, Cooks, Tastes and Smells” Like Beef

A U.S. company is getting ready to launch a veggie burger that “looks, cooks, tastes and smells” like beef burgers—and gas chromatography-mass spectrometry (GC/MS) played a role.

According to Chromatography Today, the company, Impossible Foods, set out on its mission to create a beef-like veggie burger five years ago. The development of the product was fueled by the company’s concern over how meat production—specifically beef—impacts the environment.

“But rather than just make a nice burger for vegetarians, Impossible Foods set out to make a burger that would grab the attention of meat eaters — to try and change their eating habits and make the planet a healthier place,” the publication wrote.

In order to get the aroma just right, GC/MS was used to find out what components a burger gave off during cooking, the article said. This allowed the company to replicate the smell in the veggie burger.

2. Rocks in Chile Help Scientists in the Search for Life on Mars

According to Earth & Space Science News, researchers used samples from a terrestrial analogue of Mars —the Salar Grande basin in the Atacama Desert—to test out various techniques for detecting and characterizing oxalate-bearing rocks.

Some of what they found leads them to believe that oxalate-bearing deposits on Mars are worth a close look as scientists continue their quest for life on the planet.

A team at led by Vadoud Niri at State University of New York at Oswego are expanding on NASA research on the air purification power of houseplants from the 1980s.

According to Forbes, Niri’s team used a relatively new process—solid phase microextraction coupled with GC/MS—to sample and analyze volatile organic compounds in the air. The results give scientists a better idea of which plants are good at counteracting certain kinds of pollutants such as benzene and acetone.

Plants that were part of the research include: Jade Plant, Spider Plant, Bromeliad, Caribbean Tree Cactus and Dracaena.

A team of British researchers recently confirmed that “red mud” can have a toxic effect even after all the obvious signs of contamination are gone.

According to SeparationsNow, red mud is a byproduct of processing bauxite, which is the most important ore of aluminum. However, aluminum oxide only accounts for 30-50% of bauxite, and the rest is made up of silica, iron oxides, titanium oxide and trace elements of arsenic—all of which need to be removed.

In their research, scientists were particularly interested in whether arsenic was still present in red mud. They used ion chromatography with inductively coupled plasma mass spectrometry to analyze organic and inorganic arsenic species in five different plants taken from a red mud site in Scotland’s Kinghorn Loch.

They discovered that the environmental effects of red mud can indeed linger for more than 30 years.

5. How Analytical Testing is Used to Uncover Adulterated Foods

Food adulteration, or food fraud, has emerged as a hot news topic in recent years, but it’s certainly not something new.

In this post, Innovatech Labs digs into a brief overview of food adulteration, as well as the analytical testing techniques that are being used to uncover adulteration.