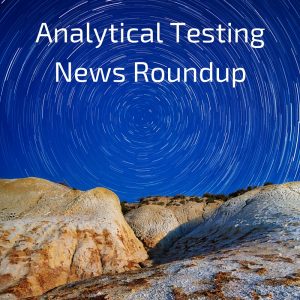 Analytical testing techniques are being used every day by scientists and researchers all over the world to make interesting and groundbreaking discoveries.

Below we roundup some of the most interesting and cool bits of news and research of analytical testing methods in action, many of which involve the making and perfection of adult libations:

A Delaware brewing company, Dogfish Head, has teamed up with the National Aquarium in Baltimore to create a brew that pays tribute to sea life, while also aiming to conserve it.

According to Baltimore Magazine, they’ve created SeaQuench Ale, a sour session beer, was just released to the public and aims to inspire aquatic conservation efforts and Aquarium research.

And here’s where analytical testing comes into play: to make the beer, the Aquarium’s water quality experts sourced a water sample from Chesapeake Bay and ran it through ion chromatography to get a breakdown and blueprint of the salt and mineral content. Then, the brewers used that information to replicate the water and sea salt for ingredients in the beer.

The process of making wine has probably gone relatively unchanged for thousands of years, with a number of compounds making up its taste, smell and color. But is it all really necessary to create something exquisite?

According to Chromatography Today, a new San Francisco company — Ava Winery — is challenging history and working to create “designer wines” that are all based on water and without grapes. And GC/MS has played a role in their research.

“After a few practice runs at adding flavourings to ethanol — they decided they needed some outside help with their project,” Chromatography Today reported. “With potentially thousands of different molecules in a bottle of wine, they had to know what’s in the wine and what effect those molecules have. They turned to gas chromatography and mass spectrometry to try and identify the components.”

JDC Coatings, Inc. (JDC) in Mount Juliet, TN has become known as an innovative and leading manufacturer of pressure sensitive adhesives (PSA), and industrial coatings and laminates, as well as a pioneer in “ultra clean” adhesives. And a critical part of their process is routine cleanliness testing to ensure products meet the standards of their customers.

“Routine cleanliness testing is a requirement for many electronic and disk drive companies,” JDC’s director of Process/Product Development, explained. “We work with their design engineers to determine the cleanliness levels that are needed to ensure that no gas or chemicals are present—or could be generated at operating condition temperatures—that would interfere with the electronic charge transfers, writing processes or other components.”

A variety of analytical techniques have been used to keep JDC on top of product quality. Some of those techniques include: solvent extraction and analysis using Fourier transform infrared spectroscopy (FTIR); ionic contamination testing for extractable anions and cations using ion chromatography (IC); and outgassing studies using dynamic headspace and gas chromatography and mass spectrometry (DHS-GC/MS).

Nobody likes stale beer, and a new film and smartphone app could help those that don’t have analytical testing expertise or equipment make sure their brew is fresh.

“One way to detect levels of furfural in beer is through the use of high performance liquid chromatography (HPLC),” Chromatography Today wrote in an article. “But, despite the accuracy with which HPLC can identify the presence of furfural in beer and thus determine how stale it is, it’s hardly something accessible to the home brewer and it requires specific equipment and knowledge, meaning it’s only really an apt solution for the laboratory.”

A team of researchers from Complutense University of Madrid have developed a film that reacts with furfural, changing color when it is present. And a new app works in tandem with the film to determine just how much furfural is present.

A lab supervisor at CF Industries’ Port Neal nitrogen complex has played an important role in developing a new testing method that will keep her and other lab workers safer.

According to the Sioux City Journal, Renee Towne wanted to find a safer alternative method for testing anhydrous ammonia for residual oil. Through a collaborative effort, a procedure was developed using a small, reusable and recyclable filter made by Oronos Spectral Solutions (OSS). The filter uses FTIR to analyze the ammonia.

“We were able to take an eight-hour test and bring it down to 20 minutes, and remove hexane from the lab completely,” Towne told the news publication. “It’s much easier, safer and faster, and it’s greener.”